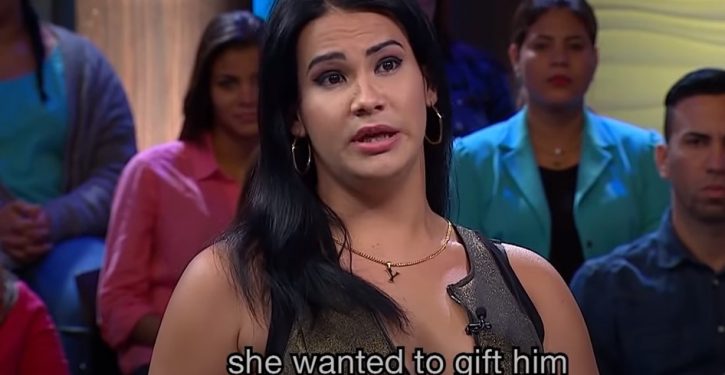 [Ed. – What hurts more than a broken heart?]

A reality TV courtroom was left stunned after learning why a woman was suing the wife of her dead lover.

On an episode of Caso Cerrado — meaning case closed — Jennifer, who is transgender and still has her male genitalia, claimed that the defendant Sylvia’s husband, Miguel, broke her penis when he had a heart attack and died while they were having sex.

Jennifer, who said she was hired by Sylvia to sleep with Miguel for his 60th birthday, appeared on Caso Cerrado in Miami to sue Sylvia for £16,000.

She told host Ana Maria Polo: ‘After we had sex he said I didn’t fully fulfill his fantasy.

She said that she thought Miguel was enjoying himself, but he suddenly had a heart attack and died while she was inside him.

Anna Maria asked: ‘Why didn’t you get up and walk away?’

Dianne Feinstein: Allowing Americans to sue China over coronavirus a ‘huge mistake’
Next Post
LeBron James: I hope we made Kaep ‘proud’ by kneeling for national anthem