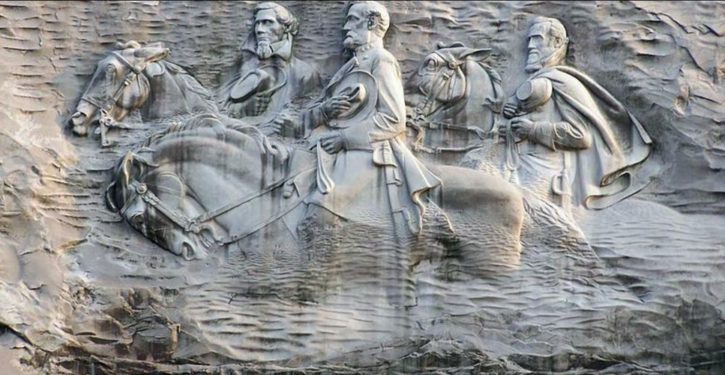 [Ed. – The story receives no national coverage, but an armed white couple is crucified by the MSM for defending their home against a mob?]

As many as 200 heavily armed Blacks dressed in military-style uniforms swarmed Stone Mountain Park in Georgia on Independence Day.

Police told television station WXIA that the northern and western entrances to the park were shut down after the self-identified members of the “Black Militia” entered the area.

Video also shows some of the militia threatening motorists who were caught in the chaos.

“What the f*** you laughing at,” one of the gunmen told a white motorist. “I’m your worst nightmare.”

The gunman then asked the motorist, “Where’s my reparations?”

Police said the protests were peaceful.

However, a video shows a man in a sniper position aiming artillery at the face of the Civil War carvings on the side of Stone Mountain.

Farrakhan: Fauci and Bill Gates are plotting to ‘depopulate Earth’ with coronavirus vaccine
Next Post
There is no epidemic of cops shooting unarmed black people