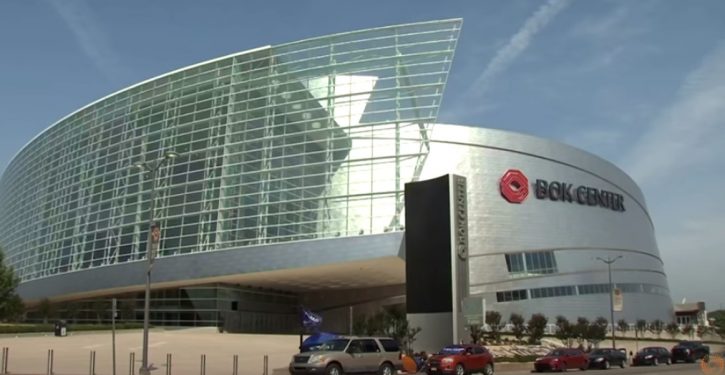 [Ed. – It sounds like the Tulsa mayor’s concern comes from reports that out-of-town troublemakers are headed to Tulsa to, well, make trouble.  The curfew applies to the area around the BOK Center that the rally-goers are already camping out in, however.  It’s true that Tulsa, a city of moderate size (about 400,000 within city limits), is not well equipped to handle this.  The state should step in to help.]

Confusion descended upon downtown Tulsa on Thursday evening after the mayor issued a curfew for the area surrounding the BOK Center, where Trump supporters have already begun gathering in anticipation of Saturday’s rally.

Tulsa Mayor G.T. Bynum (R) signed an executive order instituting a 10 p.m. curfew for the area around the Bank of Oklahoma (BOK) Center, where the president’s rally is set to take place. …

The curfew went into effect at 10 p.m. and will remain in effect until 6 a.m. Saturday. …

“As Mayor, I have received information from the Tulsa Police Department and other law enforcement agencies that shows that individuals from organized groups who have been involved in destructive or violent behavior in other states are planning to travel to the City of Tulsa for purposes of causing unrest in and around the rally,” the order states.