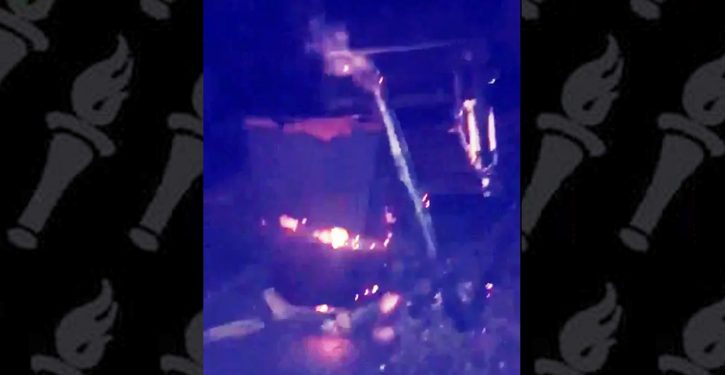 Burning cross found at the home of 17-year-old Travon Brown and family. Marion Police via BuzzFeed

[Ed. – Something off about this.  It could be a legitimate “hate” incident, but it presupposes that someone knew the 17-year-old organized the BLM protest, and knows where he lives, and particularly wanted to target the organizer.  There’s practically no recent pattern of this.  There is, however, an extensive recent pattern of hoaxes of this kind.  Not judging either way at this point, but skepticism is warranted.  The police are on the hunt.]

In a statement, the Marion [VA] Police Department said that officers were called to investigate an “intense fire” outside a local home at approximately 12:43 a.m. on Sunday. After extinguishing the fire, police said, they observed wood “that appeared to be in the shape of a cross” leaning against a burnt barrel.

The house where the fire was set is the home of Travon Brown, 17, one of the organizers of a protest against racial injustice and police brutality that was held in Marion on Saturday. He lives with his mother, Briggette Thomas, and his 16-year old sister. …

Marion police confirmed that counterprotesters showed up to the march in the town, which has a population of just under 6,000 people.

“While the interactions between the two protest groups were mostly peaceful, a counter-protester was detained, however the protester declined to press charges,” police said. “One arrest was made that resulted in a public intoxication charge.”