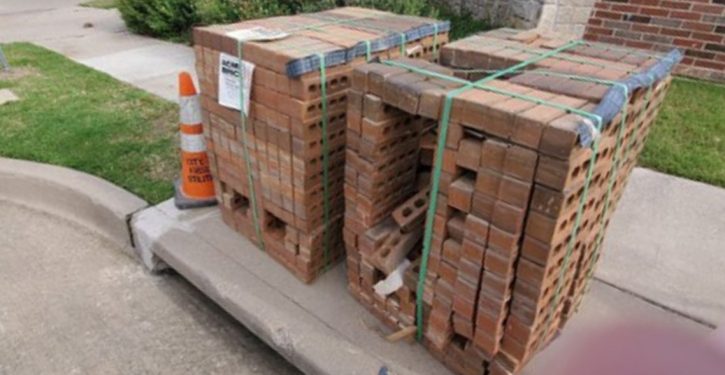 Bricks being found left in batches across U.S. at protest sites. Via Twitter

[Ed. – This is happening in too many cities to be uncoordinated.  It’s not just the biggest cities like Dallas and Seattle.  Saw it reported in Frisco earlier today and San Jose in the last day or two.  Leah Barkoukis has assembled tweets from several locations.]

In cities across the U.S. where demonstrations over the death of George Floyd in police custody are taking place, mysterious pallets of bricks are reportedly showing up in parking lots and on street corners, even in areas where there is no constructions take place.

Social media users are asking where they came from and who paid for them.

So who's donating the pallets of bricks to these riot ravaged areas? Surely there's surveillance footage, and surely they arent being brought in by hand. Start checking camera footage, run license plates. pic.twitter.com/QFHgwHVz0f