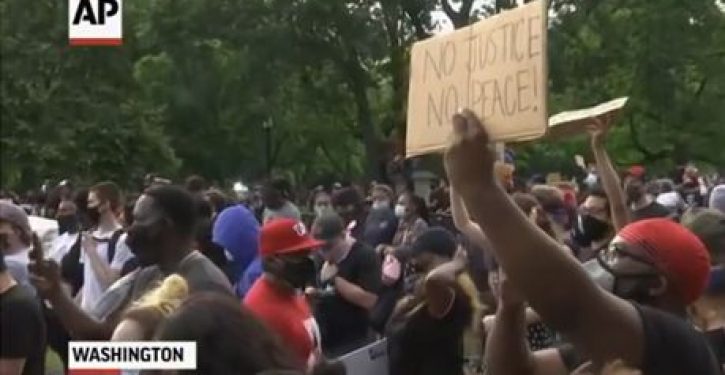 [Ed. – Remember when leftists blamed Obama and protested outside the White House when black youth Michael Brown was murdered in 2014 in Ferguson? Neither do we. –Samantha Chang]

The White House was under a brief lockdown Friday evening as violent riots erupted across the country over the death of Minneapolis man George Floyd.

Protesters swarmed the gate outside the White House, claiming that “black lives matter!” — all while ignoring the multiple black-on-black murders that occur every weekend in the Democrat-run city of Chicago.

About a dozen members of the media were moved inside the White House when it went into lockdown. While some thugs vandalized public property by scrawling “F*ck Trump!” on walls, no one was hurt.

Fox News anchor Greg Gutfeld pointed out the hypocrisy of leftists protesting President Trump over the death of George Floyd when the murder occurred in a Democrat-run city with a Democratic mayor, a Democratic governor and a Democratic Attorney General (accused woman-beater Keith Ellison).

Bin Laden killer SEAL Rob O’Neill’s take on rioters: ‘I can’t believe I fought to protect you’
Next Post
Pentagon ready to send troops to Minneapolis if state asks