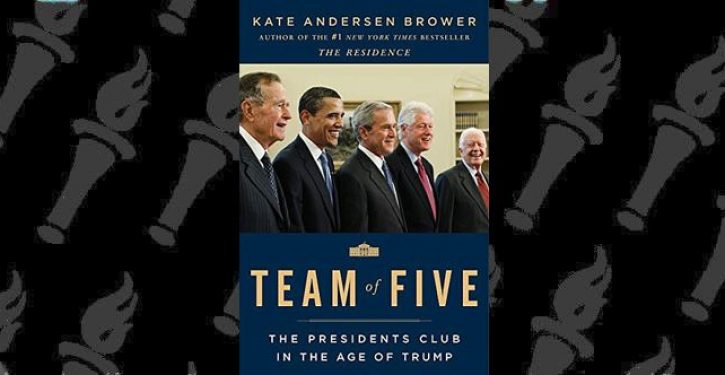 Image: Cover of 'Team of Five'

[Ed. – To paraphrase Groucho Marx, we wouldn’t want to belong to a club that would have Obama et al. as members.]

Donald Trump will be banished from the club of living former Presidents when he leaves office after offending them all and shattering their unspoken conventions, according to a new book obtained by DailyMail.com.

The President burned his bridges after trashing his predecessors and failing to show them respect — all ‘cardinal sins’ in the exclusive club of former leaders.

Not that Trump gives a damn and he is ‘proud’ he won’t be welcomed by a group he considers to be establishment elitists, Team of Five: The Presidents Club in the Age of Trump reveals.

The book, which is out next week and by bestselling author Kate Andersen Brower, says the former Presidents feel that the ‘mantle of decency that used to rest with the sitting President has now fallen to the men who used to hold that job’.