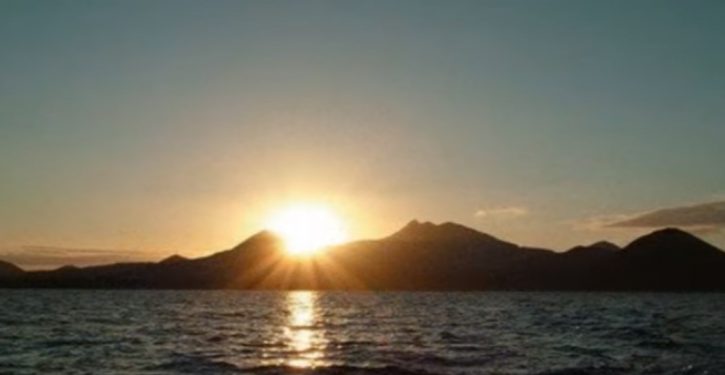 A long way from nowhere. Ascension Island in the South Atlantic (a UK territory), where magnetic fields are weaker. YouTube video

[Ed. – OK, so it’s not funny.  But come on.  It’s funny.  The Attack Anomaly splits in two?  Next it’s going to come out of someone’s thorax with a mighty screech.]

New satellite data from the European Space Agency (ESA) reveal that the mysterious anomaly weakening Earth’s magnetic field continues to evolve, with the most recent observations showing we could soon be dealing with more than one of these strange phenomena.

The South Atlantic Anomaly is a vast expanse of reduced magnetic intensity in Earth’s magnetic field, extending all the way from South America to southwest Africa.

In the last two centuries, Earth’s magnetic field has lost about 9 percent of its strength on average, the ESA says, assisted by a drop in minimum field strength in the South Atlantic Anomaly from approximately 24,000 nanoteslas to 22,000 nanoteslas over the past 50 years.

New readings provided by the ESA’s Swarm satellites show that within the past five years, a second centre of minimum intensity has begun to open up within the anomaly.

This suggests the whole thing could even be in the process of splitting up into two separate cells – with the original centred above the middle of South America, and the new, emerging cell appearing to the east, hovering off the coast of southwest Africa.