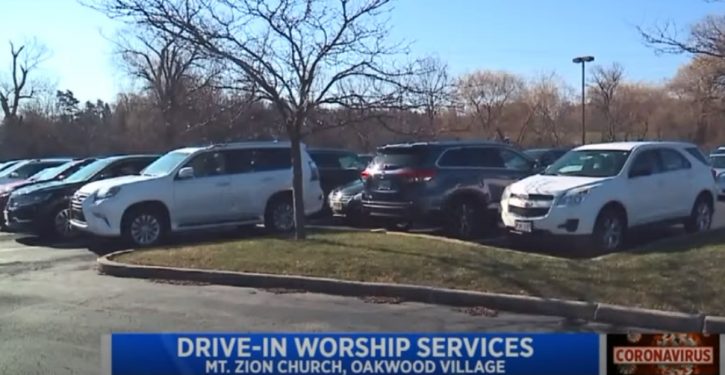 [Ed. – N.B.: it is insane to think there’s any public-health need to prohibit parking-lot church.  People sit in their cars with their windows up and listen via radio.  Judge Walker was appointed by Donald Trump.]

On Fire Christian Church had sued Louisville Mayor Greg Fischer and the city after Fischer announced drive-in style religious gatherings were not allowed on Easter.

U.S. District Judge Justin Walker sided with the church, saying that the city is prohibited from “enforcing; attempting to enforce; threatening to enforce; or otherwise requiring compliance with any prohibition on drive-in church services at On Fire.”

“On Holy Thursday, an American mayor criminalized the communal celebration of Easter,” Walker wrote in his sternly worded 20-page opinion. “That sentence is one that this Court never expected to see outside the pages of a dystopian novel, or perhaps the pages of The Onion.”

Walker added that “The Mayor’s decision is stunning. And it is, ‘beyond all reason,’ unconstitutional.”

Texas: Abbott working guidelines to start reopening businesses; order week after Easter?
Next Post
Ted Cruz slams Dianne Feinstein for holding up relief to Americans while urging it for Iran