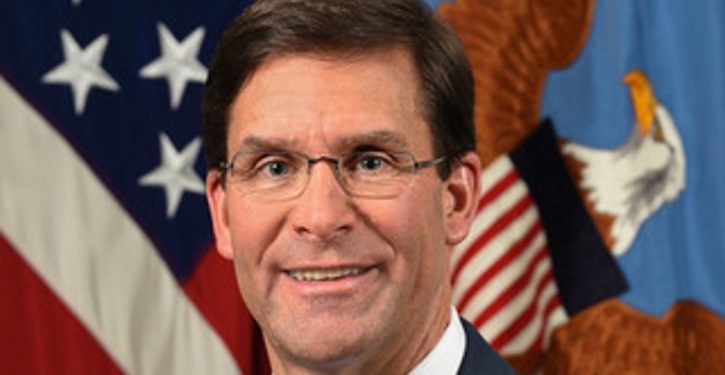 [Ed. – Trump gave exactly the right answer on this initially: “I’d sure like to see it [if they had this intel in November].”  That simple statement is what forced the agencies to vet the whole thing and come out with the extremely rare public statement that the ABC report was wrong.  But Trump didn’t have to say a word about it directly to anyone, from Esper on down.  He just had to make it clear that if they knew and didn’t brief him, he wasn’t going to sweep that under the rug.]

The Pentagon late on Wednesday said an ABC News report that said a military intelligence unit wrote a report on the coronavirus in November is not accurate.

Col (Dr.) R. Shane Day, the director of the National Center for Medical Intelligence at the Defense Intelligence Agency, said in a statement that as a matter of practice, the NCMI does not comment publicly on specific intelligence matters. He said:

However, in the interest of transparency during this current public health crisis, we can confirm that media reporting about the existence/release of a National Center for Medical Intelligence Coronavirus-related product/assessment in November of 2019 is not correct. No such NCMI product exists.

President Trump was also asked about the alleged report during a press conference at the White House on Wednesday, and when he learned of such intelligence and whether he could have acted sooner. …

“I don’t know exactly, but I’d like to see the information,” he said.