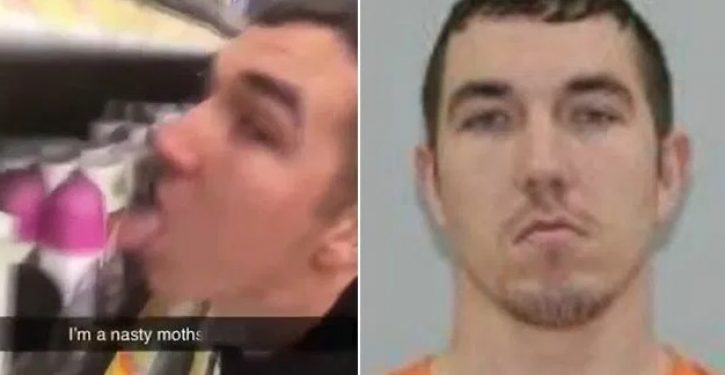 [Ed. – Last week it was a group of deep thinkers demonstrating their disdain for those fearful of COVID-19 by deliberately coughing on fresh produce in a supermarket. Now it’s this poor excuse for a human being. Here’s hoping that if the penalty is severe enough, it will discourage other ‘pranksters.’]

A US man has been charged with making a terrorism threat after allegedly filming himself licking items in a supermarket saying ‘Who’s afraid of coronavirus?’

Cody Pfister, 26, was arrested after a video of him mocking the disease, which has killed over 100,000 people worldwide, sparked outrage around the globe.

Footage from a Walmart in Warrenton, Missiouri, shows the suspect taking off a face mask and running his tongue along items on the shelf while looking at the camera. An on-screen caption reads: ‘I’m a nasty moths f***er’.

After the video was shared on social media, Piers Morgan called for the suspect to be put behind bars and deprived of healthcare should he end up contracting coronavirus himself.

Pfister is not the first person to get in trouble with police for licking surfaces as public health officials beg people to wash their hands. …

NYC to release 300 inmates from Rikers Island in response to coronavirus
Next Post
Biden busted again: ‘Four Pinocchios’ for another false coronavirus attack