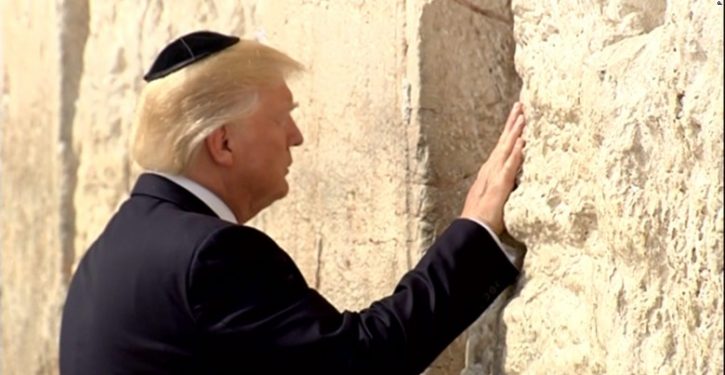 Trump at the Western Wall

[Ed. – Trump is more Jewish than Bernie Sanders can ever hope to be.]

I know that many American Jews are not the biggest fans of President Donald Trump. But I also know that when it comes to Jewish issues, no candidate is better.

President Donald Trump is the most emphatically pro-Israel U.S. president since the Jewish state’s founding in 1948. … In addition to recognizing Jerusalem as Israel’s capital and moving the U.S. embassy there, he successfully withdrew from President Barack Obama’s capitulatory Iranian nuclear deal, a huge boon for the Jewish state, and has crippled the Islamic leadership with debilitating sanctions.

Recent Gallup polling suggests that a whopping 95% of American Jews hold favorable views of Israel. For all the hand-wringing about the role of Zionism in the future of American Jewry, these statistics speak for themselves: American Jews overwhelmingly support the world’s sole Jewish state. And there has been no greater presidential defender of that Jewish state than President Trump.

Biden accused Trump of turning down WHO testing kit for COVID-19; one problem
Next Post
McConnell rejects remote voting