[Ed. – What did he expect would come of all this pandering and empty rhetoric?]

There was going to be a ‘Never Biden’ wing that emerged from the Democratic primary. That was just going to happen. That’s the nature of progressives. They’re committed to their cause and moderation is not an option. They want to beat Trump, but they’re also worried about the period after that. They want Medicare for All, free college, student debt forgiveness, and drastic actions on so-called global warming. In last night’s debate on CNN, Biden sort of said they were priorities, but Bernie is obviously the one who would be seen as more trusted to take the radical actions necessary. Why vote for Biden when he’s just a more liberal version of the system you still want to destroy? It makes no sense. As in 2016, there is a contingent that may either vote for Trump or stay home. For now, it looks like the latter. … 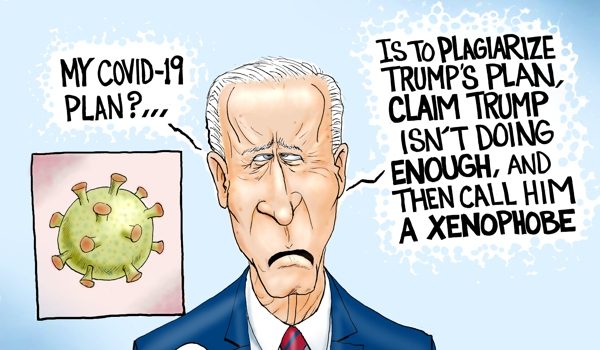 Cartoon of the Day: Bash and grab
Next Post
Bill de Blasio hits public gym, flouting his own coronavirus rules amid city shutdown