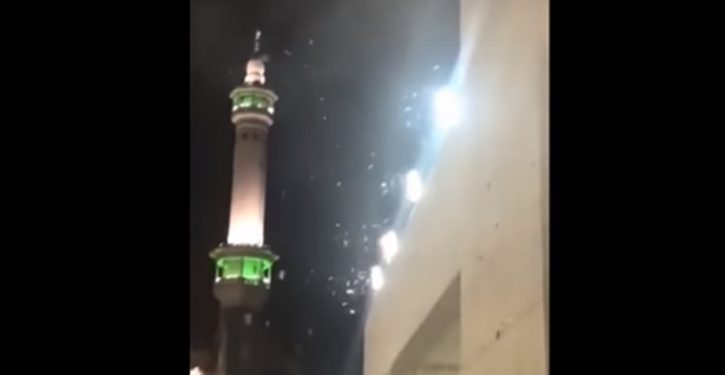 Grasshoppers burst over the wall at the Grand Mosque in Mecca. User video, YouTube

[Ed. – That’s seven days a week, five times a day, with the first call coming before sunrise via loudspeaker.]

After extensive debate, the City Council on Tuesday night voted 5-4 to approve changes in Paterson’s noise control ordinance that supporters say will allow mosques to broadcast the Islamic call to prayer five times a day.

The vote drew an impassioned standing room only crowd of more than 120 to City Hall, including some Christian pastors who opposed the measure, saying it would create a nuisance for people who live near mosques, as well as members of Paterson’s Muslim community, who praised the ordinance as a victory for religious inclusion.

About 30 people spoke during the public hearing, a group that included almost equal numbers of opponents and supporters.

“When it comes to religion, we are not equal,” asserted resident Aleya Khan, urging the council to support the noise ordinance.

Trump now adds UK, Ireland to European travel ban
Next Post
Biden has not been tested for coronavirus, campaign says