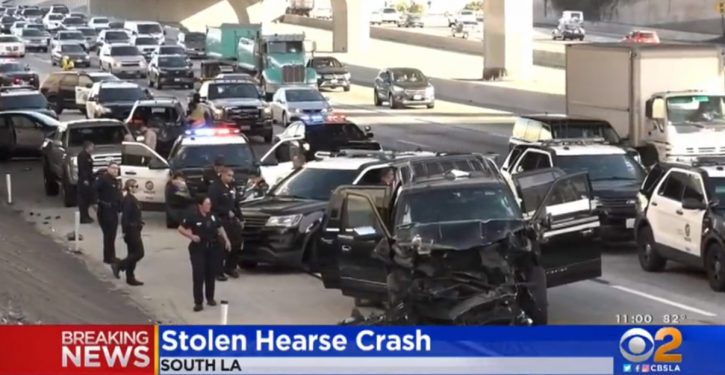 [Ed. – Sad ballads from the 1970s seem appropriate.  Seriously, what an awful thing for the family.]

A police pursuit with a hearse — which had been stolen with a body inside the night before — ended in a wreck during rush hour Thursday morning on the 110 Freeway in South Los Angeles.

An L.A. County Sheriff’s official confirmed to CBS2 that the crashed 2017 Lincoln Navigator was the same one stolen Wednesday evening from out in front of St. Anthony’s Greek Orthodox Church in Pasadena. A casket containing a body was found in the crashed vehicle, the sheriff’s department said.

The short pursuit started at 7:43 a.m. near USC, at Exposition Boulevard and Figueroa Street, when someone spotted the stolen Navigator and called 911. Responding Los Angeles police officers gave chase.