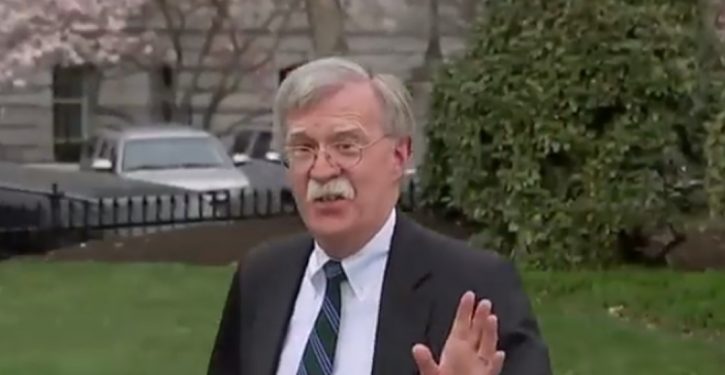 [Ed. – From which most of the rightosphere is concluding that the miraculously-timed leak from his forthcoming book was basically a publicity stunt.]

Former National Security Advisor John Bolton admitted Wednesday that his testimony in President Donald Trump’s recent impeachment proceedings involving Ukraine would have had no impact on the trial’s outcome even after sections of his upcoming book leaked attempting to convict the president in its final days.

“People can argue about what I should have said and what I should have done,” Bolton said at Vanderbilt University Wednesday night during a forum with his predecessor Susan Rice, according to ABC News. “I will bet you a dollar right here and now my testimony would have made no difference to the ultimate outcome.” …

Republicans in the Senate defeated Democrats’ efforts to bring Bolton before the upper chamber before the final vote with only Sens. Mitt Romney of Utah and Susan Collins of Maine voting in favor of the measure.

Somali community leader says Ilhan Omar did marry her brother to get him into U.S.
Next Post
New claim about Russia backing Trump with 2020 meddling conflicts with earlier claim