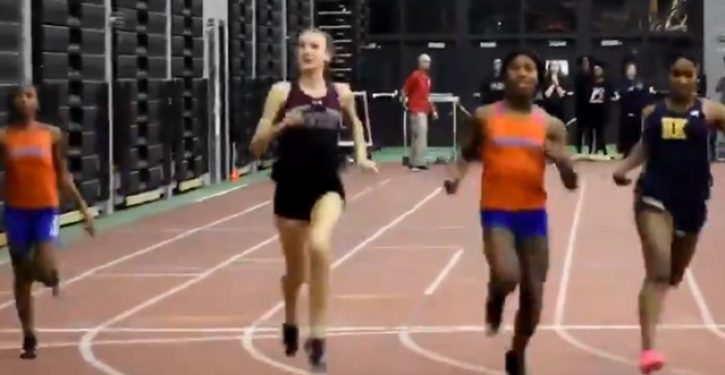 [Ed. – This will just harden the Left’s resolve to push for allowing biological males to compete in female sports.]

Two days removed from the filing of a federal lawsuit challenging the involvement of transgender runners in Connecticut high school girls sports, Friday night’s 55-meter dash in the Class S state championship was more than just a race.

Chelsea Mitchell of Canton High and Bloomfield’s Terry Miller settled into their starting blocks next to one another. Miller, who holds multiple state records, is a transgender athlete. Two days earlier, Mitchell was standing on the front steps of the state Capitol building calling for the governing body of high school athletics in Connecticut to make changes to its policy allowing transgender athletes to compete in girls sports. Her family is among three in the state responsible for filing the lawsuit.

… Mitchell bested Miller by two-hundredths of a second, her first time defeating Miller in the 55-meter dash while going head-to-head.

The mouse roars: Obama wants credit for Trump’s economy
Next Post
Stelter: Was I stupid to take Avenatti seriously as possible 2020 candidate?