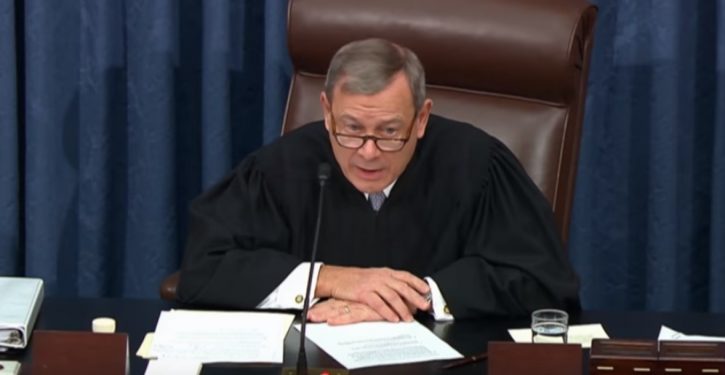 [Ed. – That’s actually a relief, for many.  We’ve seen how the Chief Justice breaks ties on the Court.]

Chief Justice John Roberts on Friday said he would not cast any tie-breaking votes in the event of a 50-50 vote on motions in President Trump’s impeachment trial.

Roberts, the trial’s presiding officer, said he believes he lacks the authority to cast a deciding vote, despite Chief Justice Salmon Chase having done so twice in the 1868 impeachment trial of President Andrew Johnson. …

His remarks came in response to a question from Senate Minority Leader Charles Schumer (D-N.Y.) about the presiding officer’s tie-breaking authority.

Roberts, appearing to read from a prepared statement, summarized the two votes by Chase in the Johnson trial.

“One had to do with a motion to adjourn and the other was to adjourn deliberations,” Roberts said. “I do not consider those episodes 150 years ago to break ties. If it is divided equally on a motion, the normal rule is that the motion fails.”

Bernie, 1972: U.S. in Vietnam ‘almost as bad as what Hitler did’
Next Post
Romney now very, very uninvited to CPAC after impeachment witnesses vote