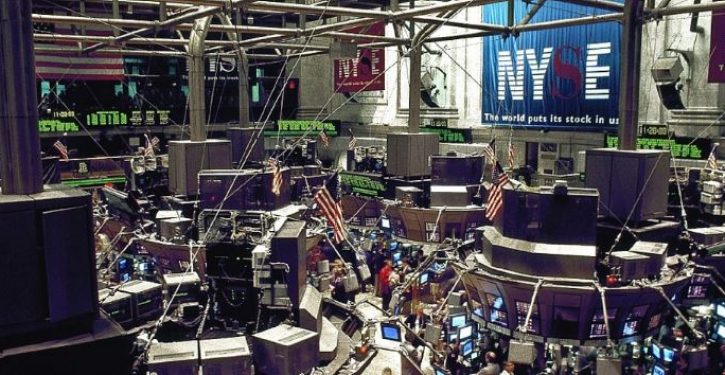 [Ed. – The MSM can’t give Trump credit for anything without simultaneously finding something to grouse about. When Barack Obama’s final jobs report came out in January 2017, showing an addition of 156,000 jobs, NPR called the performance ‘solid, but nothing flashy.’ Trump’s job reports for December showed 145,000 jobs gained, but NBC decries it as ‘weak.’]

The Dow Jones Industrial Average hit a new record high Friday, crossing past 29,000 for the first time. The blue-chip index passed the 28,000 mark just 37 days ago.

“11,000 points gained in the Dow in the 3 years since the Election of President Trump,” President Donald Trump tweeted on Friday morning ahead of the milestone. “Today it may hit 29,000. That has NEVER happened before in that time frame. That has added 12.8 Trillion Dollars to the VALUE of American Business.” @Varneyco @FoxNews The best is yet to come!”

The new milestone for the 30-member index came after a disappointing monthly government labor report, with just 145,000 jobs gained for the month of December, sluggish gains in annual wage growth, and downward revisions for November and October job totals.