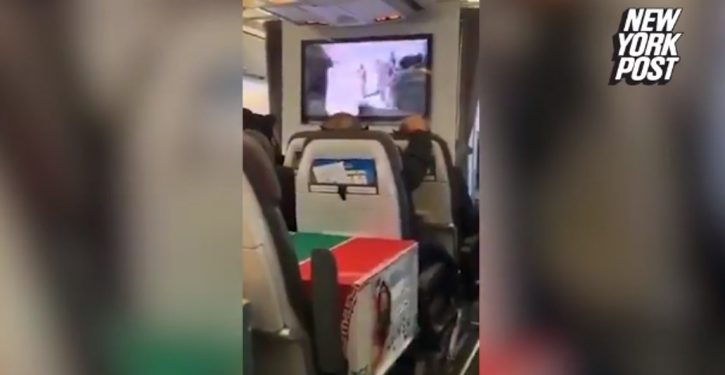 Remains of Soleimani and other Qods Force operatives killed in Iraq ride coach back to tehran. Social media video via NY Post

[Ed. – Human remains are usually transported in the cargo hold.  These rode packed across coach-class seats in the passenger cabin.  They’re not actually in coffins; they’re in the cardboard boxes used for this purpose.]

The remains of Qassem Soleimani, the Iranian military commander killed in a US drone strike, were apparently placed in a cardboard box and flown out of Iraq across rows of passenger seats, new video shows.

The recording shot aboard a Mahan Air flight and posted on Twitter appears to show Soleimani’s coffin and those of others killed in the attack on an Airbus from Mashhad to Mehrabad Airport in Tehran — as a tribute video plays on one of the plane’s screens.

Babak Taghvaee, who describes himself as a defense analyst and freelance writer, posted the video Sunday on Twitter.