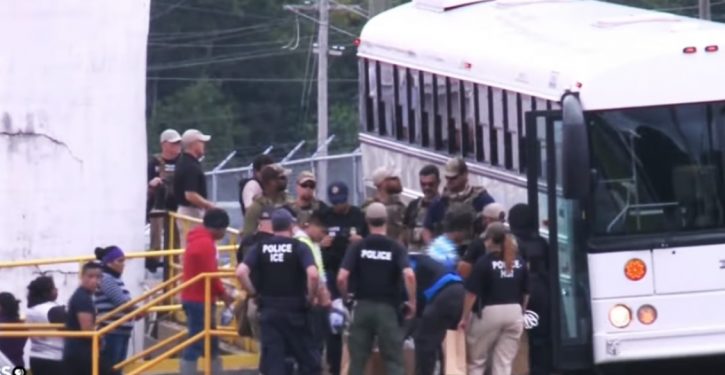 [Ed. – Maybe someone can explain why it’s important to go through the process of letting illegals into the country and then having to remove them before Americans can get jobs.  Don’t rail at the businesses; the problem here is government, and the collective determination of elected representatives to keep constituencies (including those businesses) bribing and voting for them.]

African Americans are taking back jobs that were stolen from them by illegal immigrants. In August, Immigration and Customs Enforcement (ICE) officers swept up 680 illegal immigrants during raids on seven food processing plants in Mississippi. Without the cheap labor, the companies were forced to hire Americans to do the work.

By the end of the 1960s, black workers predominated on the lines. …

“The chicken plant,” Dr. Stuesse [an associate professor of anthropology at the University of North Carolina] quoted a civil rights veteran saying, “replaced the cotton field.”

243 of the 680 illegal immigrants rounded up in August were working at the Koch Food processing facility in Morton, Mississippi. That’s a lot of jobs for a small town with a population around 3,600 people.