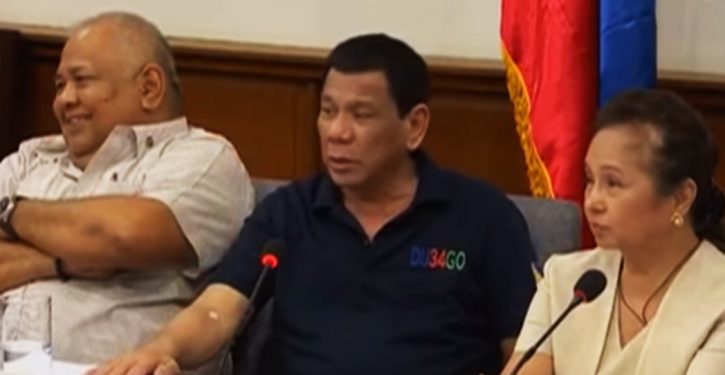 [Ed. – Granted, Duterte is a nut.  Don’t know the rights and wrongs of this myself (and no time to check right now), but it seems a bit odd that Leahy and Durbin would be the only ones in the Senate wanting to censure the Philippine government over this, if it’s a slam-dunk situation.]

Democratic Sens. Patrick Leahy and Dick Durbin have been banned from visiting the Philippines over a measure that aims to punish Philippine officials involved in the jailing of a government critic.

“The Philippines is immediately ordering the Bureau of Immigration to deny US Senators Dick Durbin and Patrick Leahy — the imperious, uninformed, and gullible American legislators who introduced the subject provisions into the 2020 budget — entry to the Philippines,” Salvador Panelo, a spokesman for President Rodrigo Duterte, said during a news conference Friday. …

The provision protested by the Philippine government was included in the spending package passed by Congress last week. It denies entry to the U.S. to those involved in the incarceration of Philippine Senator Leila de Lima, according to Reuters.

De Lima, an ardent critic of Duterte’s anti-drug campaign, was arrested in 2017 and led an investigation into mass killings that took place during the Philippine president’s drug war. (CBS)

Between the lines: Likely identities of confidential human sources in IG report
Next Post
Psychiatrist says Pelosi can require Trump to submit to ‘involuntary evaluation’