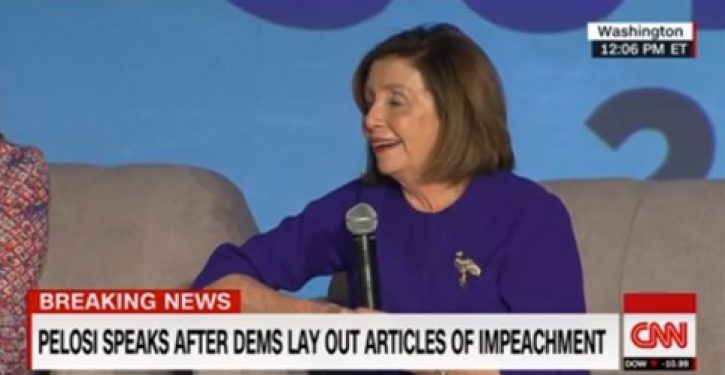 [Ed. – Pelosi is a doddering old woman who supported impeachment only after the extreme-left wing of her party ran roughshod over her. In so doing, she is following them over the cliff that will end many Democratic House members’ careers.]

What a dramatic turn of events Pelosi has engineered since Trump rose to power. Not so long ago, she was a political punching bag for Republicans. They ran political ads all over the country morphing the pictures of Democratic candidates into images of Pelosi and issuing stark warnings to voters that any Dem running for the House would be a Pelosi stooge. Even some of her own members preferred fresh leadership as Trump took office.

Now, however, she is enjoying not only a last laugh but also a major comeback—mostly because she has been more successful than any other Democrat at outmaneuvering and often outfoxing President Trump.

With the nation’s attention riveted on her as she has guided the impeachment inquiry, she has been at her absolute best—keeping an ideologically diverse and at times unruly caucus largely satisfied. …