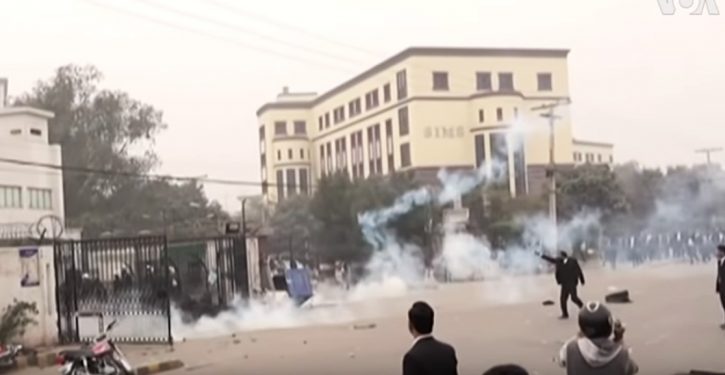 [Ed. – Sounds like somebody needs to work on his anger management.  Need a ruling from @realDonaldTrump on that to be sure.]

A mob of two hundred lawyers attacked the Punjab Institute of Cardiology (PIC) in Lahore, Pakistan, on Wednesday, causing at least 12 deaths, several of them critical care patients whose treatments were interrupted by the riot.

The swarm of lawyers was armed with firebombs and a number of handguns. Police cars were set ablaze during their confrontation with riot police, while the hospital suffered damage to windows, doors, and delicate equipment inside.  …

The bizarre rampage was touched off by a scuffle on Tuesday that sounds like a comedy skit gone horribly wrong: a lawyer demanded priority treatment at the hospital, the doctors said no, and the lawyer marched off to the local police station to demand they arrest the recalcitrant doctors on terrorism charges.

When the police said no, the infuriated lawyer returned to the hospital with some of his colleagues for a confrontation with the doctors, who filmed the ensuing confrontation and posted the video online with commentary mocking the lawyers. The following day, a mob of two hundred enraged lawyers descended upon the hospital and began trashing everything from parked cars to medical equipment.