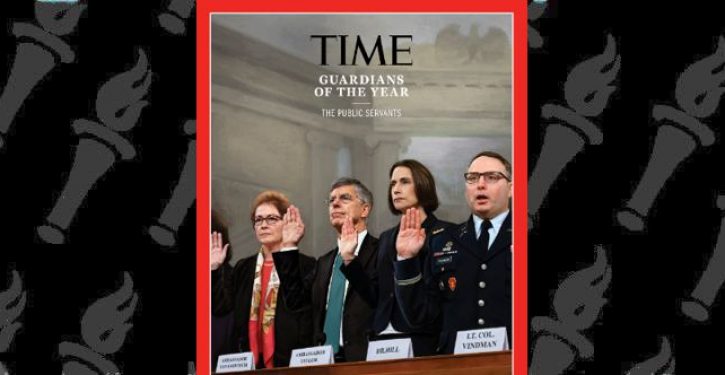 [Ed. – Since they had already already name Heidi their ‘person of the year,’ the magazine had to invent a new honor to bestow on Marie Yovanovitch and her band of Trump haters.]

There are 363,000 federal workers in the greater Washington, D.C., area. In the first week of September, history turned in the office of one of them. The intelligence analyst who blew the whistle on President Donald Trump had just gotten off the phone with the Inspector General’s office. One of a handful of people who had read the analyst’s report alleging that Trump had solicited foreign interference in the 2020 election, the Inspector General had found the analyst’s concerns “urgent” and “credible.” But there was a problem: higher-ups in the intelligence community had spoken to the White House. Both were blocking the IG from sending the complaint to Congress.

The public servants came forward to tell their stories anyway. In Kyiv, the 33-year veteran diplomat Marie Yovanovitch, known as Masha, was one of the first. …