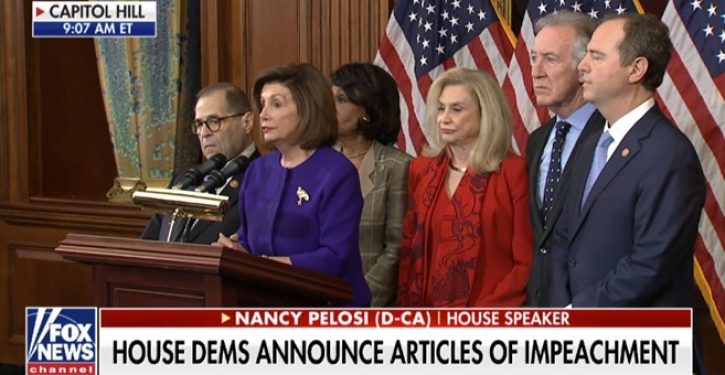 [Ed. – What happened to bribery and extortion?]

House Democrats on Tuesday announced articles of impeachment against President Trump alleging abuse of power and obstruction of Congress regarding his interactions with Ukraine, touching off a rapid-fire sequence that could result in a momentous floor vote in a matter of days.

“The framers of the Constitution prescribed a clear remedy for presidents who so violate their oath of office,” said House Judiciary Committee Chairman Jerry Nadler, D-N.Y. “No one, not even the president, is above the law.”

The key Democratic committee leaders, along with House Speaker Nancy Pelosi, D-Calif., outlined their plans in a brief and pointed statement to the media, and left without taking questions.

Nadler said the judiciary panel will introduce two articles “charging the president with high crimes and misdemeanors.” He said the first is dedicated to “abuse of power.”…

Former top FBI lawyer: I want Trump ‘to apologize to me’
Next Post
Al Green: Another reason we need to impeach Trump is … slavery