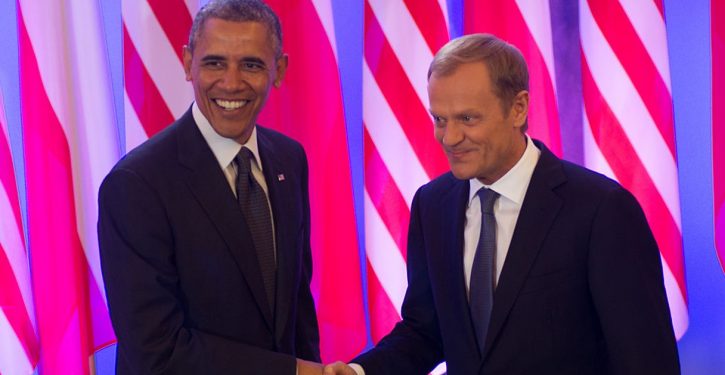 [Ed. – It seems the “Trump effect” train of exposures will not end until every Western progressive elitist has been revealed.  Tusk was the European Council President until 30 Nov 2019.  He’s a former prime minister of Poland, which is why he got so many replies in Polish.  NOTE: This image appears rather obviously to have the forearm and gun-gesture hand photoshopped in.  The point is not whether Tusk himself made the gesture; it’s that he posted the image.  I didn’t make that clear in the original posting of this. – J.E.]

Former European Council president Donald Tusk shared the shocking image of him making the gun gesture and pointing it to the back of an unsuspecting President Trump on Twitter. The Polish politician captioned the image: “Despite seasonal turbulences our transatlantic friendship must last #Trump #NATO.” He has been condemned for the move that has come at extraordinarily tense times in Western politics. …

Another [reply] said in English: “What a vile, pathetic, petty little man you are!!  All this gesture shows the world is that you didn’t have the balls to make it when he was facing you!!”

A third told him in Polish: “I understand that the shot may have been unfortunate, but the photo was intentionally posted. It’s good that the fate of the world is in the hands of serious and responsible people.”