[Ed. – Did she succeed in walking through the second front door of her house?]

Christine Blasey Ford, the California professor who accused Supreme Court Justice Brett Kavanaugh of having sexually assaulted her when they were teenagers, said in a rare public appearance Sunday night that she had a responsibility to the nation to speak out.

Blasey Ford, a professor of psychology at Palo Alto University in Northern California, accepted the Rodger Baldwin Courage Award from the ACLU of Southern California in Beverly Hills, near Los Angeles. Her appearance at the event wasn’t disclosed ahead of time.

“When I came forward last September, I did not feel courageous. I was simply doing my duty as a citizen,” she said.

“I understood that not everyone would welcome my information, and I was prepared for a variety of outcomes, including being dismissed,” she said. 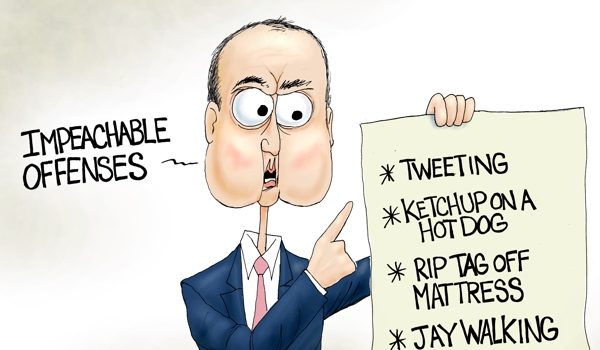 Cartoon of the Day: High crimes
Next Post
Analysis: Media’s Biden standard of ‘no evidence’ is a double standard

Voters will notice the Dems’ irrational hatred of Trump

Jimmy Fallon’s love letter to Joe Biden: You were ‘so eloquent,’ ‘it was mind-blowing’

Toronto recalls $200K worth of ‘poor quality’ masks: Guess where they were made