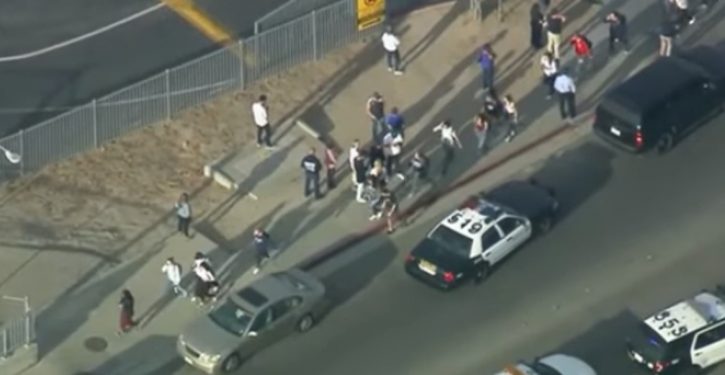 [Ed. – The two students who died were rushed to the trauma center in Santa Clarita earlier with critical injuries.  The shooter later shot himself during the manhunt in his neighborhood, but survived.  Are we ready to acknowledge yet that our society is raising a generation of amoral nihilists?  Teaching “identity” division and resentment will never result in moral restraint toward others.  The problem isn’t with the guns.  And far from being useless, prayer is the only thing that can turn this around.]

A 14-year-old boy and 16-year-old girl are dead and three other students are injured after a classmate opened fire at a high school in Southern California Thursday morning, officials said.

The 16-year-old male suspect was taken into custody and is in the hospital in “grave condition” from a self-inflicted gunshot wound, authorities said.

Detectives reviewed video from the scene which showed the gunman in the quad of Saugus High School in Santa Clarita when he took a gun from his backpack, shot five people and then shot himself in the head, authorities said. The early morning school shooting was on the suspect’s birthday, authorities said.

According to Nancy Pelosi, the burden of proof rests with Trump
Next Post
Feds preparing for private land takings in Texas in order to build border wall sections