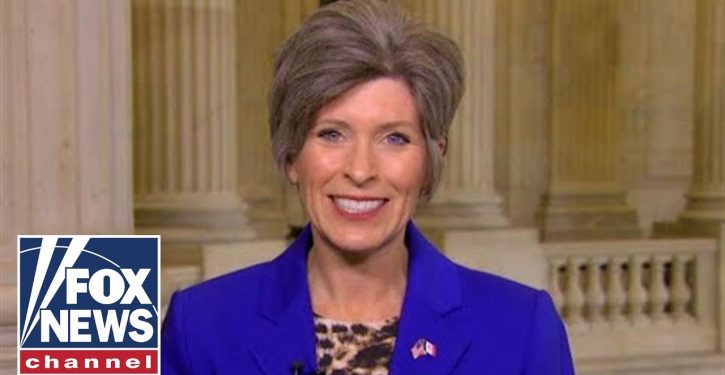 [Ed. – Pelosi should stick to targets her own size — or, better still, should follows the senator’s advice.]

After CNN reported  that Sen. Joni Ernst (R-IA) was unwilling to answer a CNN correspondent when she was queried as to whether it was appropriate for President Trump to ask a foreign government to investigate a political rival, House Speaker Nancy Pelosi snidely subtweeted Ernst, without bothering to confront her directly. Pelosi tweeted, “Republicans are now refusing to answer the simplest question: whether it’s acceptable for a president to pressure foreign countries to undermine our elections. American elections should be decided by Americans, not by ‘favors’ from foreign governments.”

If Pelosi expected Ernst, who served in the Iowa Army National Guard from 1993 to 2015, where retired [sic] as a lieutenant colonel, to be intimidated, she was sadly mistaken. Ernst fired back, “Actually, American elections should be decided by ELECTIONS. Not politicians. I know you’re still upset about the results from 2016, but people here in Iowa would sure appreciate it if you spent less time playing political games and actually brought #USMCAnow up for a vote.”