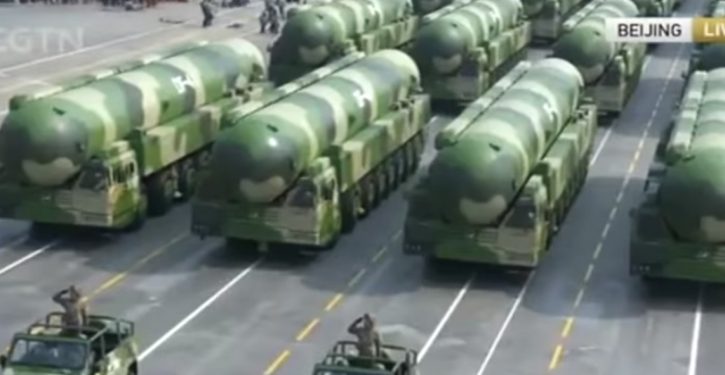 [Ed.- The DF-41 isn’t the most modernized ICBM China has been working on, but it’s still formidable.  Our national BMD defense continues to lag the actual threat, having been optimized since the mid-1990s not for Russian and Chinese missiles but for North Korea’s much older-technology missiles.  Our ground-based interceptors for countering ICBMs from Asia are deployed in California and Alaska.  When he cancelled the deployments in Poland and Czech Republic in 2009, Obama made sure we would have none in Europe or eastern North America to counter a launch from that vector.  If those deployments had continued on schedule, we would have had an eastern-rim defense in place since 2013.]

Chinese state media claim the new weapon is intended to protect the PRC from “nuclear blackmail.”

The parade included 16 mobile DF-41 launchers, praised by Chinese experts as a flawless weapon system that had “no failure record” during testing and development.