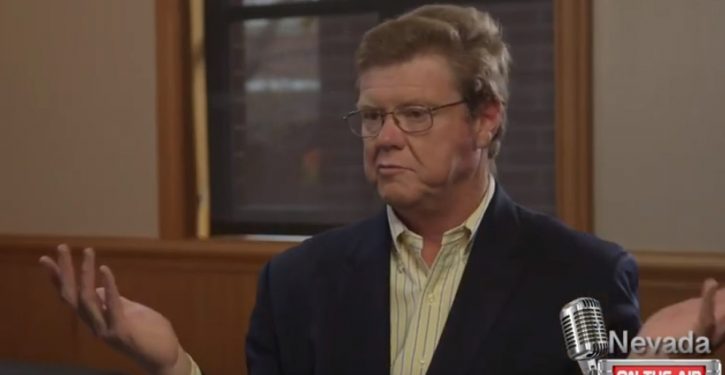 [Ed. – Looks like NYT simply got this one wrong (thus setting off an MSM chain reaction), seemingly by misreading the original write-up by a Nevada news outlet.  Although I’d never defend NYT on getting such a big fact wrong – especially since they’re refusing to correct – it does have to be admitted that Amodei is apparently a really wordy fellow.  He says a lot more than necessary to get basic yes-or-no points across – and it’s detail, not weasel-wording or obfuscation that your reflexes can filter automatically.  Worth the follow-up here as a reminder of how much is coming to us all ragged and messy and inaccurate these days.]

What [Amodei] does support is what every other member of the House of Representatives and the Senate—in addition to the White House—supports, which is a resolution that passed both the House and Senate unanimously with White House backing earlier this week calling for the so-called “whistleblower complaint” and other information to be transmitted to the relevant congressional committees. In the House, that was H. Res 576. It passed the House 421-0. Amodei told Breitbart News that he has been misquoted by many in the national media who say that means he supports an “impeachment inquiry,” but that he does not support one. …

Amodei … voted with all the Republicans in the House in favor of a resolution from House Minority Leader Kevin McCarthy to express disapproval with the way in which Pelosi had launched Democrats’ impeachment proceedings against Trump.

Previous Post
Multi-BRANCH effort appears to have been behind suspect change to ‘whistleblower’ standard
Next Post
DOJ investigation of CIA, FBI activities in 2016 takes A.G. Barr to see foreign officials