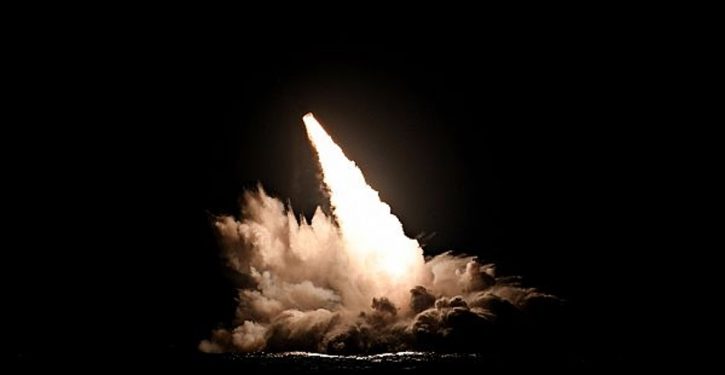 [Ed. – Keeping the strategic deterrent in condition.  The Trident II (D-5) missile, launched from Ohio-class nuclear-powered missile submarines, is the sea-launched leg of the strategic nuclear triad, which also includes air-delivered nuclear munitions (from the B-2 Spirit and B-52 Stratofortress) and ground-launched ICBMs.  Test launches do not include live warheads.]

The first two launches took place Sept. 4, and the last two were Sept. 6. All occurred before sunrise. …

These launches mark 176 successful flights of the Trident II (D5) strategic weapon system. CETs and other flight tests are conducted on a recurring, scheduled basis to evaluate and ensure the continued reliability and accuracy of the system. The missile tests were not conducted in response to any ongoing world events. …

The Trident II (D5) strategic weapon system, originally designed with a life span to 2024, recently underwent a life extension that will keep it operational through the late 2040s. The life-extended missiles will serve for the remaining service life of U.S Ohio-class and United Kingdom Vanguard-class SSBNs, and as the initial loadout for the U.S. Columbia-class and U.K. Dreadnought-class SSBNs.