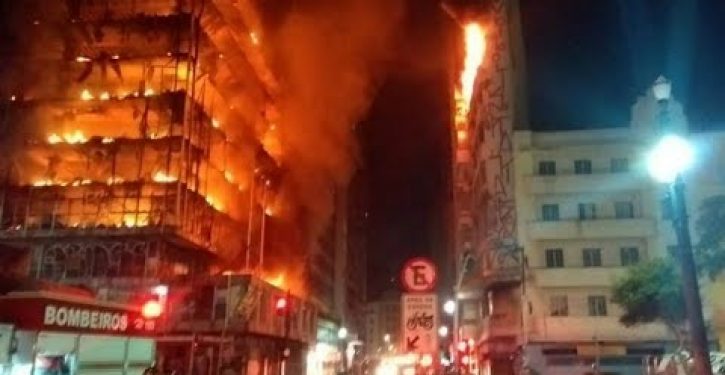 One of the Amazon's many large buildings on fire. (Image: YouTube screen grab)

[Ed. – Hmm, you mean to say celebrities aren’t the ultimate authority on matters of science?]

The increase in fires burning in Brazil set off a storm of international outrage last week. …

Singers and actors including Madonna and Jaden Smith shared photos on social media that were seen by tens of millions of people. “The lungs of the Earth are in flames,” said actor Leonardo DiCaprio. “The Amazon Rainforest produces more than 20% of the world’s oxygen,” tweeted soccer star Cristiano Ronaldo. …

And yet the photos weren’t actually of the fires and many weren’t even of the Amazon. The photo Ronaldo shared was taken in southern Brazil, far from the Amazon, in 2013. The photo that DiCaprio and Macron shared is over 20 years old. The photo Madonna and Smith shared is over 30. Some celebrities shared photos from Montana, India, and Sweden.

Ilhan Omar accused of committing perjury 8 times in 2017, could face 40 years in jail
Next Post
Is Andrew McCabe about to be indicted for lying under oath?