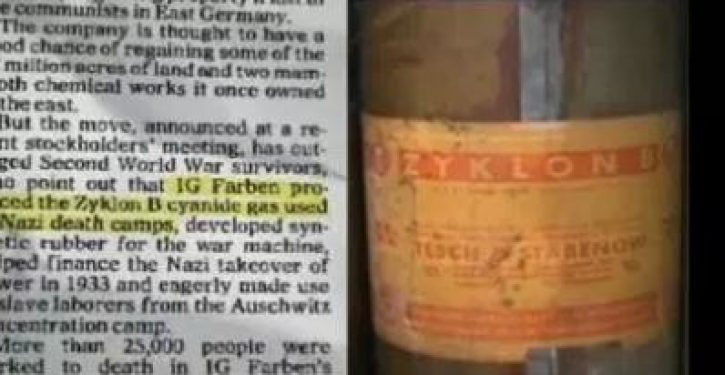 Zyklon B (Image via LifeNews)

Did you know? The company that provided Zyklon B for the Nazi holocaust later provided RU-486 for the American Holocaust.

At the end of World War II, the German chemical manufacturer, I.G. Farben, was identified as the company that supplied the gas used in the Nazi concentration camps. The gas was called Zyklon-B and evidence later showed that Farben’s executives knew how it was being used.

In fact, evidence was uncovered to indicate that Farben engineers had actually designed the gas chambers. This led to some of them being tried at Nuremburg for crimes against humanity including genocide and slavery. Interestingly, I.G. Farben was a financial partner with John D. Rockefeller and Standard Oil of New Jersey in a company called Standard I.G. Farben.

Graham: America must ‘accept the pain that comes with standing up to China’
Next Post
CNN guest: Trump ‘may be responsible for many more million deaths’ than Hitler