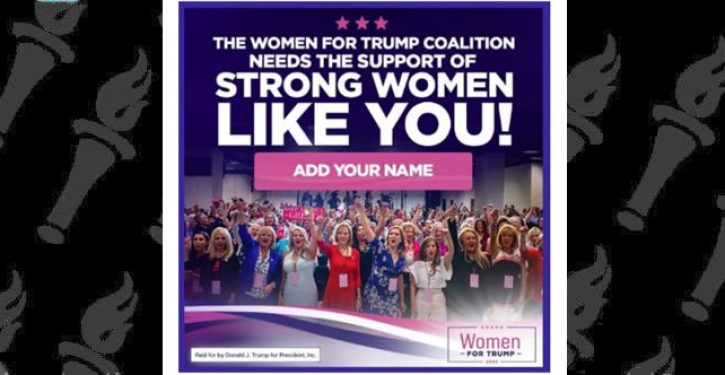 [Ed. – The writer, who is sympathetic to Facebook’s move, describing the policy violation as ‘laughably obvious,’ sees no problem with what is clearly an abridgement of the group’s First Amendment rights.]

Facebook has pulled another Donald Trump campaign ad for blatantly violating its advertising policies, but it only did so after being reached by the progressive Popular Info newsletter for comment, according to a Monday report by the newsletter.

The ad in question, below, featured an image of a crowd of women accompanied by the caption, “The Women for Trump Coalition needs the support of strong women like you!”

A Facebook spokesperson told Gizmodo that the ad violated a section of its policies that prohibits “content that asserts or implies personal attributes,” including “direct or indirect assertions or implications” about traits such as race, ethnicity, gender and sexual identity, religion, or financial standing.

“Can confirm we notified the campaign that the ads violate policy,” a Facebook spokesperson wrote in an email to Gizmodo. “They cannot continue to run unless fixed.”