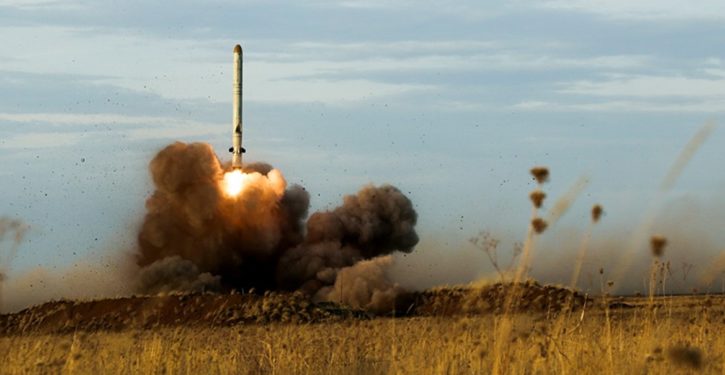 A separate culprit: the Iskander short-range missile, being fired in Russian drills in 2015. The SSC-8 currently at issue is from the same family of missiles, and may be easily mistaken for the Iskander, which is formally deployed in an INF-compliant version. (Image: Russian MOD via russianforces.org)

[Ed. – One thing you can count on: they will never be truthful.]

Two Russian nuclear monitoring stations—specifically designed to detect radiation— “went silent” in the days following an explosion of what many believe was a nuclear-powered missile earlier this month during tests at a remote base, a nuclear official said in an email Sunday.

Lassina Zerbo, the head of the Comprehensive Nuclear Test Ban Treaty Organization, told The Wall Street Journal in an email that two days after the explosion that the monitoring stations in Kirov and Dubna suffered “communication and network issues.”

There have been reports that Russia has not been fully transparent about what occurred at a military base in the far northern Arkhangelsk region. The initial report from the country’s nuclear agency said that five workers were killed in a rocket engine explosion.