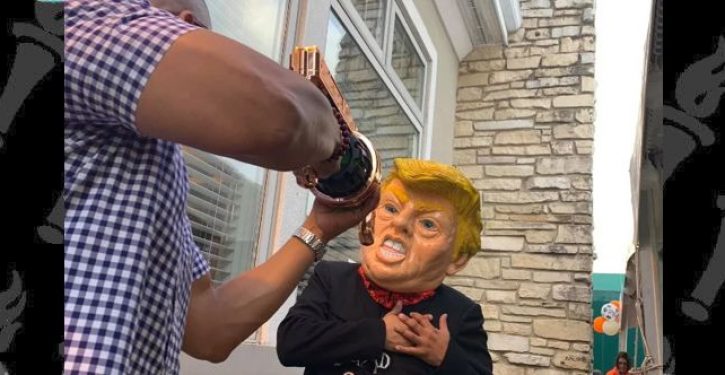 [Ed. – Just imagine that the year was 2011, and the target of this fundraising effort was Barack Obama.  How loud do you imagine the din from the Left would be?]

A political fundraiser for a Democrat state lawmaker in Illinois simulated an assassination attempt of a ‘mock’ Donald Trump.

“A political fundraiser for Senator Sandoval simulates an assassination attempt against a mock Donald Trump decked out in Mexican garb. Looks like a man pointed a fake assault weapon at the fake President to pose for a picture,” WCIA3 reporter, Mark Maxwell said in a Twitter post.

Social media users tagged Secret Service to alert them to what they perceived as a threat to President Trump.

“The incident that took place is unacceptable. I don’t condone violence toward the President or anyone else. I apologize that something like this happened at my event,” Sandoval said.

On New York Times’s new ‘racism’ theme, Americans should be the ‘Unteachables’
Next Post
‘Gender is over’: New York Times celebrates genderless fashion