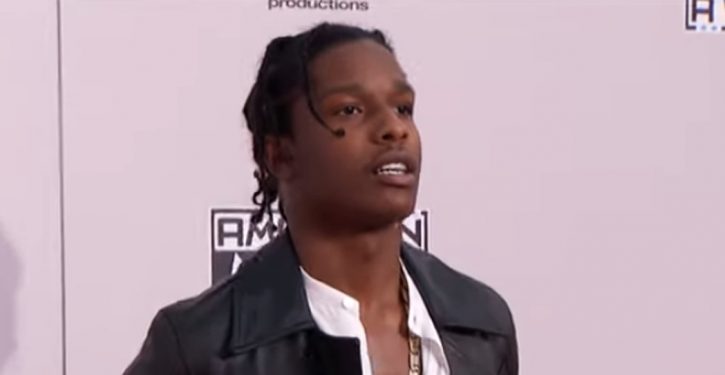 [Ed. – See here and here for video of the interaction for which the U.S. rapper has been charged. The footage at least raises questions. There seems to be a good case that he was never aggressive; the guy who ended up getting body-slammed was pestering Rocky’s group, wouldn’t leave them alone, and at one point physically assaulted Rocky’s bodyguard.  Not sure what’s going on with Sweden’s point or purpose in this.]

American rapper A$AP Rocky pleaded not guilty to assault as his trial in Sweden opened Tuesday, a month after a street fight that landed him in jail and became a topic of U.S.-Swedish diplomacy.

Rocky, whose real name is Rakim Mayers, is accused with two others of beating a 19-year-old man in Stockholm on June 30. Prosecutors played video footage in court that showed Mayers throwing a young man to the ground.

Wearing sweatpants and a green T-shirt in court, Mayers, 30, pleaded not guilty to an assault charge that carries a maximum penalty of two years in prison. He says he acted in self-defense. …