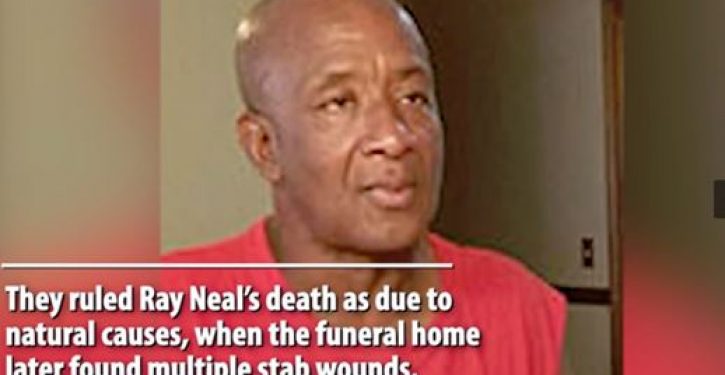 [Ed. – Who was the medical examiner? Mueller?]

A medical examiner’s investigator in Gwinnett County, Georgia, was disciplined after she listed the cause of a man’s death incorrectly twice.

WSB-TV learned the investigator listed Ray Neal’s death as being due to natural causes when he had actually been stabbed several times.

“There’s no way. It was too much blood,” said Neal’s sister, Michelle Smalls.

The first officer to arrive at Neal’s Lexington Drive duplex also found it suspicious, writing in a report, “I observed a large amount of blood on the bed and underneath Ray Neal. I also observed blood on the walls in the bathroom and on the shower curtain.”

But because Neal had several known illnesses, including hepatitis C, the investigator apparently believed the blood loss was part of his natural death.

“She was in. She went in all of 10 minutes and said it was natural causes. The funeral home director came to pick him up. When he walked in, he said, ‘This is something totally different than what they said,’” Smalls said.