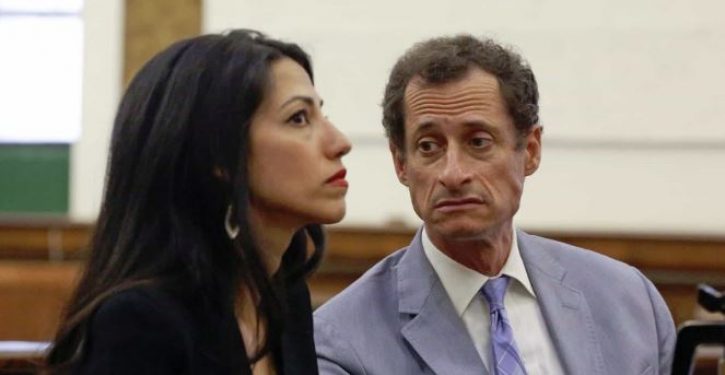 [Ed. – Talk about your gluttons for punishment.]

Anthony Weiner has moved back in with Huma Abedin, DailyMail.com can exclusively reveal.

The 54-year-old was seen rolling boxes and designer garment bags into the Hillary Clinton aide’s home over the weekend. Weiner never lived in the lower Manhattan apartment where Huma moved with their seven-year-old son Jordan soon after the disgraced politician went to prison.

Weiner didn’t have any help as he used a trolley to cart in his belongings, wearing a white tank top, shorts and sneakers as he made several trips inside the building.

Abedin had filed for divorce the day Weiner entered into a guilty plea for sexting a 15-year-old girl in May 2017, which DailyMail.com exposed a year earlier, but withdrew her request in January, deciding to settle privately.

It’s not clear where Weiner had been staying since leaving a Bronx halfway house in May after spending 21 months in custody for the illicit contact with the minor.