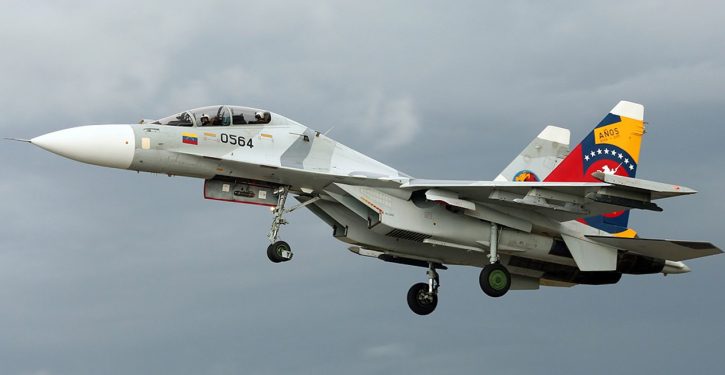 [Ed. – Taking a page from Russia’s playbook — as a defense client of Russia and using a Russian-made Su-30 jet.  Interesting development, recalling the point that Russians have sometimes been actually flying the planes in such clients’ exploits in the past.  A U.S. Navy EP-3 isn’t armed or equipped to respond with force to such provocation, but the U.S. could have fighters on station with the requisite capabilities within moments.  Venezuelan pilots are not prepared to hold their own in that case.]

A U.S. Navy intelligence aircraft was “aggressively shadowed” by a Venezuelan fighter jet over the Caribbean Sea on Friday in a move that U.S. officials are calling “unprofessional” and endangered the safety of those on board.

The U.S. Southern Command (SOUTHCOM) said Sunday in a news release that a U.S. Navy EP-3 Aries II aircraft was flying a mission in international airspace when it was approached “in an unprofessional manner” by the Venezuelan SU-30 Flanker fighter plane, a Russian-made jet.

“After reviewing video documentation, we have determined the Russian-made fighter aggressively shadowed the EP-3 at an unsafe distance in international airspace for a prolonged period of time, endangering the safety of the crew and jeopardizing the EP-3 mission,” SOUTHCOM said in a statement.

Virginia Dems will boycott historical commemoration at Jamestown if Trump comes
Next Post
Spygate: Weissmann shows up – again – apparently putting finger on the scale of due process