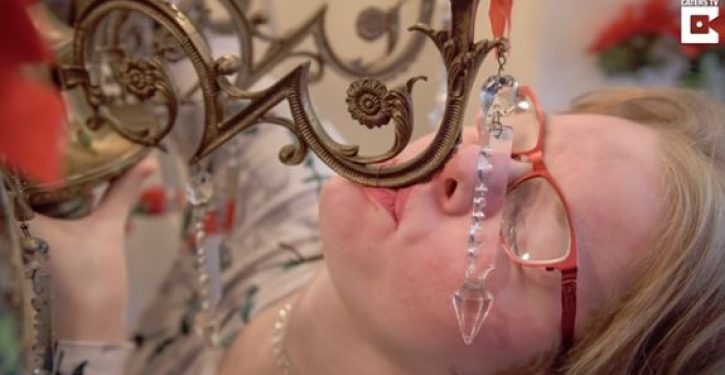 Get a room, you too! (Image: YouTube screen grab)

[Ed. – So many possibilities: How about ‘Gives a new meaning to light of my life’? Or ‘It will never last because of the age difference.’]

A bride-to-be is excitedly planning her big white wedding in a bid to marry her chandelier.

Amanda Liberty, describes herself as being in an open relationship with several chandeliers and is determined to shed light on her unusual relationship

She hopes that ‘marriage’ to her favourite one will prove her love is valid .

Amanda, 35, from Leeds, identifies as an objectum sexual — which means she is attracted to objects.

And the bride-to-be — who had previously changed her surname by deed poll during a relationship with the Statue of Liberty — has decided to seek a commitment ceremony to her chandelier known as Lumiere.

Whilst the Leeds native acknowledges that she can’t marry her love in the traditional way later this year, she is determined to prove her love exists — and is worth just as much as marriage between humans.

Poll says: The world’s most admired woman is …
Next Post
Federal law says ‘go back to where you came from’ counts as discrimination