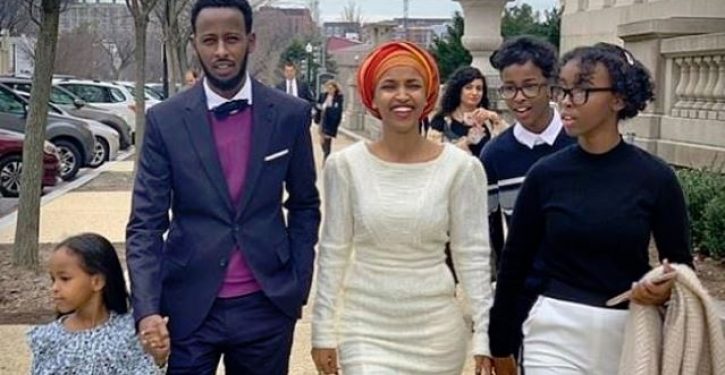 [Ed. – When journalists in Minnesota raised the possibility Omar was a bigamist, she called the allegations ‘baseless, absurd rumors’ and accused the journalists of ‘Islamophobia.’]

‘I’m not legally married to two people, but I am legally married to one and culturally married to another.’ That’s how Ilhan Omar’s campaign spokesman Ben Goldfarb summarized Omar’s conjugal arrangements in an email in August 2016, when Omar was running for Congress and her advisers were trying to stifle allegations of double marriage — with a man alleged to be her brother.

Omar supplied this email to the Minnesota Campaign and Public Disclosure Board’s investigation into her campaign financing. That investigation concluded on June 6 by ordering Omar to refund $3,500 in misused campaign funds, and to pay a $500 fine. It also revealed that in 2014 and 2015, Omar may have broken federal and state law by filing a joint tax return with her husband Ahmed Abdisalan Hirsi — when she was married to another man.

Drug kingpin ‘El Chapo’ likely to spend the rest of his life at ‘Alcatraz of the Rockies’
Next Post
Ocasio-Cortez: Trump’s ‘violent rhetoric’ is putting ‘millions of Americans in danger’