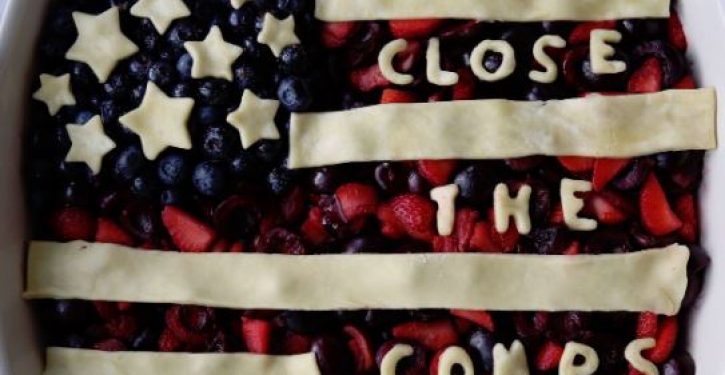 [Ed. – We’d be a lot better off as a nation if every member of ‘The Resistance’ expressed its dissatisfaction with administration policies by baking a pie (though we’d be careful about sampling food cooked by a rabid liberal in this day and age).]

What better way is there for a celebrity host of a cooking competition show to protest America’s policy on illegal immigration than to bake a pie? How about a pie decorated with the American flag and the words “Close The Camps” spelled out in the dough for Independence Day? That is what Padma Lakshmi, host of the television show Top Chef did.

There seems to be a pattern developing, using food as a political statement. Recently, it was cookies. Now it’s a pie. It looks like a tasty fruit pie but the political message is not so appetizing to those of us who want our country’s borders secured.

Padma Lakshmi uses her social media accounts to promote #TheResistance. She sure doesn’t think highly of female supporters of President Trump’s policies, either. Sorry, ladies, you’re just robots. She posted a tweet mocking women after the one about her pie.