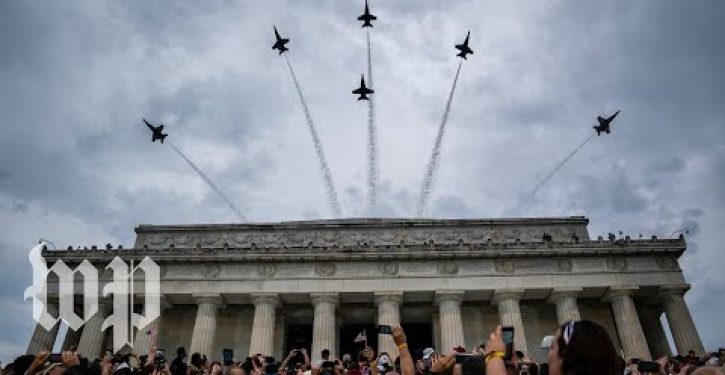 [Ed. – So the event was non-controversial, but ABC News saw a need to mention in the title that it was ‘not without controversy.’ Interesting decision.]

On the steps of the Lincoln Memorial, President Donald Trump delivered his “Salute to America” speech that side-stepped politics and focused on the military, American history and cultural moments that ranged from the Revolutionary War to the birth of rock ‘n’ roll.

“Hello America, hello,” Trump said at the start of what he promised to be the “show of a lifetime” that in the end, was a more subdued, rain-soaked and patriotic tribute to the Fourth of July.

“Today, we come together as one nation with this very special Salute to America,” Trump said. “We celebrate our history, our people, and the heroes who proudly defend our flag — the brave men and women of the United States military.”

Despite concerns about the president politicizing the speech, the president stuck to the script for the unprecedented presidential spectacle, with Air Force One flying overhead as the first lady and president walked out.

Cory Booker crosses into Mexico to escort asylum seekers to U.S.
Next Post
In case you weren’t aware, those tanks at Trump’s July 4th pageant were meant as a threat