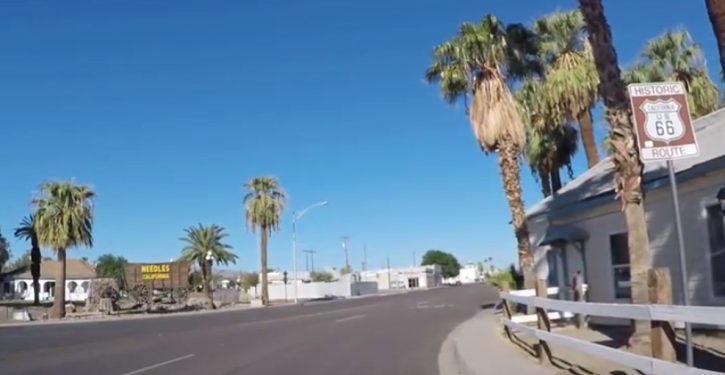 Sanctuary. Needles, CA goes all in for the 2A. YouTube video, Interstate 411

[Ed. – You typically take the road less traveled (I-40) into the Mojave Desert to get there, so at least the folks from the LA area don’t make it as often as they get to Vegas on I-15. (Pro-tip: definitely take the 10 all the way to Highway 177/62 — Rice Road — to make the I-10-to-I-40 jump.  Glorious drive, especially out of season. You can go straight to Needles up US 95 from Vidalia Junction, if that’s where you want to go.  A bit nasty with the big rigs.  But the better bet is to cross into Arizona on 62 and go up around Parker Dam and through Havasu City. The drive to the 40 from there is pleasant.)]

Californian ideas often spread like a virus to other places.

But one good idea has been imported to the state.

California has some of the strongest gun-control laws in the nation. One little city in the Golden State has decided to swim against the current.

Needles is a former railroad town located just across the Colorado River from Arizona and about 40 minutes from Laughlin, Nevada.

The leaders of this town of less than 5,000 souls want to provide sanctuary — not for undocumented immigrants, but for supporters of gun rights.

The City Council put forth a resolution declaring Needles a “Second Amendment sanctuary city.” Even if the legal footing of such a declaration will be questioned, the intentions of the city’s leaders are clear.