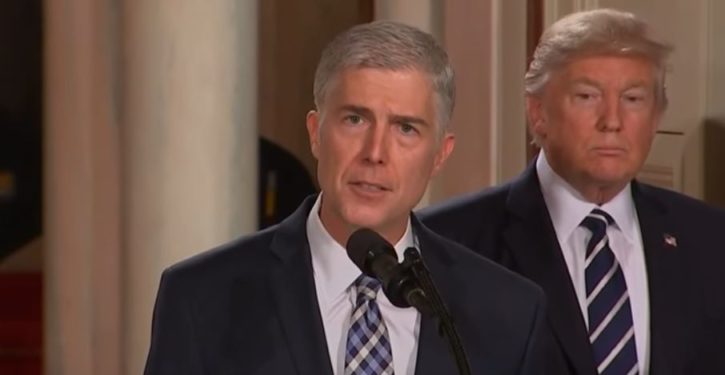 [Ed. – Shouldn’t this amaze liberals, who think that all conservative judges are puppets?]

Associate Justice Neil Gorsuch was the first in a string of successful judicial nominations for the Trump White House. Not all of them have been smooth; Justice Kavanaugh’s was one of the most brutal in recent memory. And yet, while the Left views any conservative justice on the Court as a slide toward fascism, some conservative jurists have sided with the liberals in the recent spate of Supreme Court decisions.

Today, Justice Gorsuch sided with the liberal wing in striking down what he described as a “vague” gun law, one that Kavanaugh noted was essential in driving down violent crime (via Fox News):

Gorsuch sided with liberal justices in a 5-4 decision in United States v. Davis, for which he wrote the opinion of the court. The law in question calls for longer sentences when a person uses a firearm in connection with a “crime of violence,” which is defined as a felony “that by its nature, involves a substantial risk that physical force against the person or property of another may be used in the course of committing the offense.”