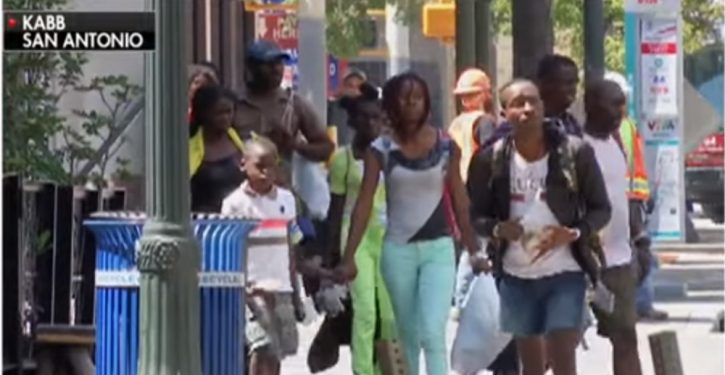 [Ed. – Shades of Central Americans being handed what looked like cash at the origin of one of the caravans.]

These aliens, who somehow managed to fly to Central America or Mexico, don’t speak English and, as one local reporter has revealed, San Antonio is desperately seeking volunteers for French-English interpretation.

Investigative journalist Urs Gehriger, who speaks French, spoke with some of these Congolese migrants and discovered that they are being coached by NGO’s not to speak with ICE officers.

Gehriger also said that the migrants just so happen to have rolls of cash.

He said that an aide noticed several of the Congolese migrants had rolls of $100 bills in their hands.

Who is lining these migrants pockets? Literally?

Gehriger said that the aliens he spoke with refused to tell him how they got into the US, and it’s clear that they’ve been well-briefed on the importance of hiding who is behind their migration to the Americas and into the US.

“They wouldn’t tell me anything about how they got here, and then they started to get aggressive and they were contradicting each other,” Gehriger explained. …

Former Dem congressional aide who doxxed Republicans during Kavanaugh hearings gets prison time
Next Post
Barack Obama is ‘very concerned’ about country, will get involved in 2020 campaign