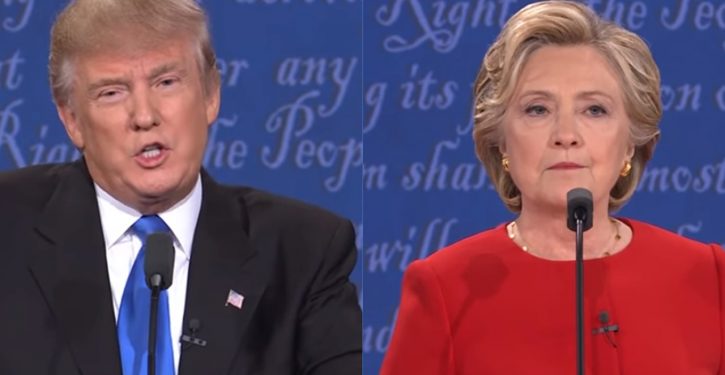 Everyone probably knows by now that ABC’s George Stephanopoulos asked Trump in an interview if Trump would accept information about an opponent offered to him by a foreign source, and Trump said he might do so.

In a longer passage on the topic, Stephanopoulos asked this:

If foreigners, if Russia, China, someone else offers you information on an opponent, should they [i.e., campaign aides] accept it, or should they call the FBI?

Trump said, “I think maybe you do both.”

“I think you might want to listen, there isn’t anything wrong with listening,” Trump continued. “If somebody called from a country, Norway, [and said] ‘we have information on your opponent’ — oh, I think I’d want to hear it.”

I can’t get exercised about this.  It’s such a transparent attempt to put horse blinders on, see nothing but the question, and frame something Trump never even did (see the Mueller report) as an act of villainy.

There are multiple ways to knock this down, but let’s not waste time. The principal one would be pointing out that Hillary Clinton didn’t wait for dubious foreign oppo on Trump to come to her.  She sent people out to beat the bushes for it, paid more than $150,000 for it, and — bonus — shoveled it not just into the FBI but into the Justice Department, the State Department, and the U.S. Congress.  Her handmaidens at Fusion GPS diligently fed it into the U.S. media at the same time.

The Russians have never had it so easy.  If we assume they were indeed behind efforts to shop Hillary’s emails to the Trump campaign — and there are significant reasons to doubt that — they tried a number of times and never got a bite from Trump.  On the other hand, Fusion’s contract spy Christopher Steele, as we are to understand it, showed up on Hillary’s dime eager to write down whatever Russians wanted to feed him about Trump, and pump it into the U.S. government and the U.S. election.  Hillary cronies Sidney Blumenthal and Cody Shearer were trailing around taking notes on the same Russian dezinformatsiya circuit, for good measure.

We could go on and note that Hillary didn’t just pay for the oppo dig.  The FBI (which also paid Steele for it) and DOJ then took its work-product and built a FISA application around it.  We could keep going through the litany of Stefan Halper and whatever the heck the whole Joseph Mifsud/shadowing Joseph Mifsud episode was.  The FBI spent tens of thousands of taxpayer dollars going back and forth to Europe to consult over the work-product of Hillary’s paid bush-beating oppo effort.  The FBI “investigations” and the Mueller special counsel operation have run into the tens of millions.

And if there was indeed a bear in the woods behind that Hillary oppo, feeding (unsubstantiated) “bad news” about Trump into the Hillary campaign, the media, and the U.S. government — what a payoff the Russian bear got.  We’re well into year three of the derangement of American politics courtesy of Hillary’s oppo and “Russiagate.”  Money for nothing and Russia’s kicks for free.

The 2020 election is about fear of the future
Next Post
Escalation: Iran fingered in new attacks on oil tankers; U.S. destroyer renders aid, rescues 21; *UPDATE* Video of Iran taking mine off vessel